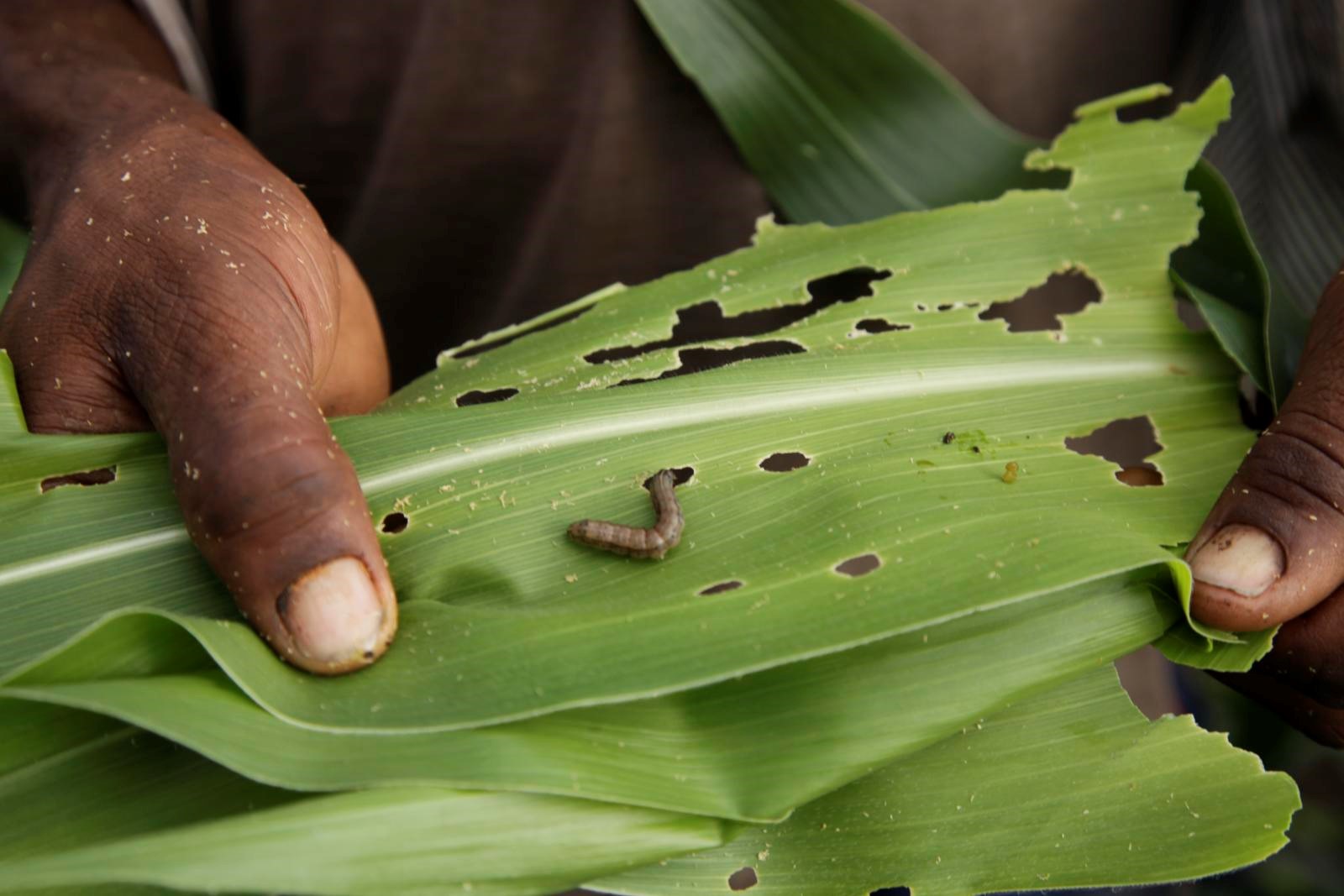 I’m talking about the Fall Armyworm (FAW), an invasive pest that has spread quickly across the African continent. Originally from the Americas, FAW was first reported in West Africa in early 2016 and now seriously threatens food supplies across the continent.

The pest has a catastrophic combination of traits. It travels fast (at up to 1,600 kilometers in 30 hours). It loves maize, a staple food crop in Africa (as well as 80 other plant species) (CIMMYT), and, it’s active at night and burrows into plants, making it hard to spot and treat.

FAW has now been identified in well over 40 African countries (FAO), and agriculture experts estimate the pest could cause losses of up to 20 million metric tons of maize in just 12 African maize producing countries annually (University of Exeter and CABI).

To avoid such losses, it is imperative to get information into the hands of farmers so they can properly identify and manage FAW. However, given the rapid spread, and, the lack of precedent on the African continent, it has been challenging to get up-to-date and accurate information on the pest.

That’s why Feed the Future, together with Land O’Lakes International Development and the Foundation for Food and Agriculture Research, launched the Fall Armyworm Tech Prize, aimed at leveraging the immense progress in mobile and digital technology to get timely, context-specific, and actionable information into the hands of smallholder farmers and those who support them.

From March 28 to May 14, Feed the Future put out a global call for innovative applications, from anyone, anywhere. And, 20 of the most promising ideas will come together for a co-creation event in Uganda at the end of June to work with mentors, experts, and farmers. After refining their prototypes, our finalists will begin testing their products in the field. Based on the results, and the potential to go to market, five prize awards will be made to the most compelling solutions this Fall.

So, what types of applications were received? Perhaps of no surprise, all of our finalists use a mobile phone for collecting and/or sharing data and information with farmers. Approximately 75% of the solutions can work with just a feature phone, while around 90% focus on, or have added services with, a smartphone.

85% of the finalists utilize text messaging, either through USSD or SMS platforms, while 60% use voice calls or an interactive voice response (IVR) system. Approximately 15% leverage radios, and a significant number of the finalists also leverage videos, pictures, or photos in their solutions.

Where it gets interesting: the vast majority of finalists (around 80%) use data analytics, largely driven by artificial intelligence or machine learning. Another 80% (not necessarily the same 80%) use spatial or location-based data as a component of their solution. Further, four finalists are proposing to utilize drones, and one will be integrating blockchain technology.*

I encourage you to check out all 20 of the Fall Armyworm Tech Prize finalists and follow their progress during our co-creation event in Kampala, Uganda June 26 – 29 on Twitter (#FallArmyworm). I also encourage your partnership as mentors, resources, and potential investors as our finalists develop, test, and launch their solutions over the coming months. Feel free to reach out at fawtechprize@nesta.org.uk to get more involved!

*Note: Details on applications are estimates and subject to change as products are refined.